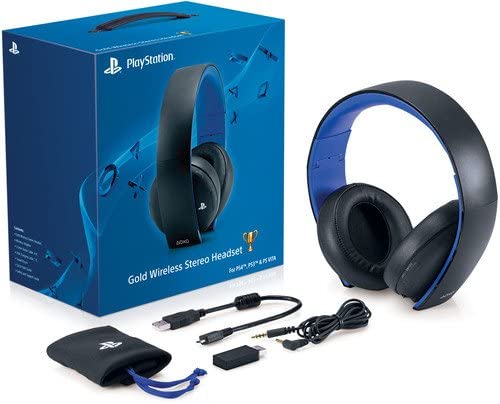 Completely designed for PlayStation this headset is freaking awesome with a beautiful design as well as high quality. As we know Sony never compromises on their product quality. Different from all other expensive headsets, you don’t have to have a good pair of ears to feel the difference.

Surround only for PS4/PS3

Beautiful design with the minimal framework

The headset includes a volume up and down buttons, a mute button, an extra pair of buttons to balance between game audio and multiplayer chat. It also has a toggle button between to select the virtual surround sound and the old standard two-channel stereo.

The control options are same as seen before on the earlier PlayStation Gold Wireless Headset, but the build quality and design are cleaner and attractive in this new iteration. The days of cheap-feeling sliders for volume and balance are gone now. They’ve been replaced by buttons molded into rubberized plastic which just feels aesthetically great.

A visible microphone coming out of the headphone is also finally missing here. The microphones are now built into the headphone itself which is awesome. Different from the earlier headset, the Gold peripheral also doesn’t have flex in it when you pull the two ends to place it on your noggin.

At the sides of the headset, you get customizable faceplates. They can be swapped out for others and it will definitely be sold down the line as an extra purchase. But, As of now, you’ll have to stick with the PlayStation buttons logo on the faceplates. However, people aren’t really crazy enough to wear this mammoth of a headset on the subway regardless of the faceplate, but you can’t eliminate the probable.

The fitting of the PS4 Gold Wireless Headset is very comfortable. It fits nicely on the head with large, leather-covered, ear-enveloping cans. Despite being next gen and excellent sound quality, it is still prone to some design flaws. It still has a primarily plastic feel, which comes off as being a  little cheap as compared to some other brands with extravagant headset options. Yet, the price to performance ratio here is hard to beat. For a $100, the headphone impressive,  and we consider it to be a nice bargain.

Let’s talk about the specifications of PS4 Gold Wireless Headset. Sony products haven’t always been about the specifications rather, it has always been about the performance so is the case with the PlayStation Gold Wireless Headset.  Sony always has the technology to beat the competition without the use of top of the line specifications. The PlayStation Gold Wireless Stereo headsets don’t have the specs to match the Platinum Wireless unit but they are very good when it comes to sound reproduction. If your plan is to use this headset with your PlayStation 4 then neglect every other headset out there.  This headset is designed to give you a legitimate audio performance on the PlayStation 4.  But if you are one of those people who want to multi-task and play around with the tech, there are a few cautions. The use of 3.5mm jack is dependent on the batteries of the headset for that sweet surround sound in addition to sound signal processing. When the batteries die,  there’s a huge drop in quality of the headsets. The same applies to PC connection too.

There are other richer headsets with broader, bigger sound, but for this price range, the PlayStation Gold Wireless Headset is great for every type of content consumption.

We heard very sweet sounds in games like Middle Earth: Shadow of War and Assassin’s Creed: Origins. The sound we heard was electric and it slammed hard. The sounds came out pretty clean in our testing. The Virtual 7.1 Surround sound really does live up to expectation.

Average Sound with a premium fell however.

Don’t get us wrong though, you’re still likely to remember the fact that you’re wearing a headset. The complaint to be made about the Gold Headset is its lack of a general largeness of sound. The range of the sound that it provides is no match for some higher-end devices.  It still is an entry-level headset with a premium feel however, it’s the best at that price point. Apart from games, the PlayStation Gold Wireless Headset is also equally amazing for films. Films like Jumanji and Star wars the last Jedi on Blu-ray has an amazingly immersive sound even with a 5.1 signal.  If we go with a full virtual 7.1 sound on a Blu-ray film, the details you catch while listening is insurmountable.

You won’t find any controls on the headset itself for tweaking the signal. The bass sounds a bit thin when you use the factory settings. The control of the signal can do by downloading the free PlayStation Headset Companion app, which lets you select from a lot of sounds presets like rock, jazz, blues, pop etc or you can just freely tweak the bass and the treble through the equalization to your preference.

But this is done from via a separate app on the console so, you can’t hear your setting on the fly as you’ll have to make a blind guess with the sound levels and then hit and trial back and forth to find the type of sound you prefer. It can be very irritating when you’re watching a Blu-ray film.  You will need to exit the playback of the content you’re watching just to use the app and tweak a small setting. The audio presets exclusively for certain Games are also set to debut soon but none are these available as of now on the PlayStation 4.  We also have no clue if third-party games will offer this feature.

Strong Clear But More Work Can Be Done on Virtual 7.1 Surround sound

However, sound from the Gold Headset is very strong and clear.It may not be on par with the range of a $200-300 headset, yet, it’s a rather big leap from the television speakers.

The connectivity of the Ps4 Gold Wireless Headset is a real plus point. It is compatible with almost anything. Connecting the PlayStation Gold Wireless Stereo Headset to your console and getting it running is a walk in the park. A small USB adaptor is included. This plugs into the front of your PlayStation 4 or PlayStation 3. Powering on the headset on PlayStationt4  takes you to a screen prompt where assignment the headphone to a user can be performed.

Widely Compatible And Easy to Setup.

As it is a wireless device, the PS4 Gold Headset is very compatible with a PC and/or a Mac via the USB adapter and certain tweaks in each of the Operating Systems. There’s also a PlayStation Vita compatibility, but that can be achieved by plugging the headphone jack included into both the headset and the handheld. In addition to this, the Gold Headset can work as a standard wired headphone. It is compatible with an MP3 player, a phone, or really any other device. Mind you, You will not be getting that virtual surround sound through a headphone jack but still, the two-channel stereo playback is also surprisingly a good listen.

The battery life in this thing is also very good. Sony has promised 8 hours of battery life from a single charge. Charging the device is done via its micro USB port, which you can link to the front of your PlayStation console when you’re not using it. Sony’s estimated battery life is apparently true. This allows for a few meaty gaming and film-viewing sessions before a charge is needed. But you do need to avoid battery drains which can be problematic on the overall battery life.

8 hours of battery life from a single charge.

Gamers who game on different platforms don’t want to own more than one headsets. For that, this headphone can be considered because of its compatibility. But for longtime runs, gamers can also choose other headphones too. Sony’s headset is primarily targeted towards the PlayStation fans. There surely is a great number of players on the PlayStation but that approach by Sony to make their product kind of exclusive might just decrease their market share which really is a letdown if we consider all the benefits it can provide.

After seeing everything about PlayStation Gold Wireless Headset Review all we can say is that Audiophiles who only opt for top gear and are willing to spend for it can actually find better options on a higher price, with better compatibility across various consoles. But for people on a PlayStation console looking for good quality sound, PS4 Gold Stereo Wireless Headset is a very strong pick. This PS4 headset works in a very similar fashion to Sony’s earlier headset on PlayStation 3. The new streamlined build is very neat. The new design format focuses on a comfortable design. The cups can be folded which make it easier to store and portable to take with you. It also ships with a headphone cable for use with PlayStation Vita and other audio devices.

Priced at $100, The bargain you get is worth it. The pricing is not too much and what you get is a finely designed product delivering quality virtual surround sound, a built-in mic, and additional compatibility options. That’s a pretty excellent bang for the buck for a PlayStation gamer.