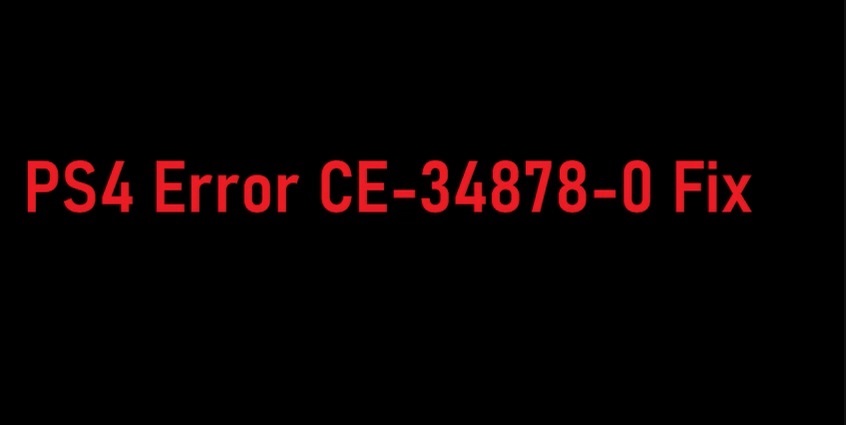 PS4 Error CE-34878-0 can be a pretty annoying error for most of the gamers as it won’t let us play the game at all. This error can happen from time to time when we try to open a game and is a heartbreaker for somebody who just had his hand on the deluxe edition of the games for 100$ and it won’t start at all. Ps4 ce- 34878-0 error is so common that it may happen in all of the games you try to run. You may also see it as error code like CE-36329-3 or you may get a notification like“An error has occurred in the following application (ce-34878-0)”.

The above shows the error in the notification bar in the PS4. The worst part of the error is that it crashes without any primary error so you really don’t have time to save your games or backup the files. The cache file of the app doesn’t save and what I mean by that is if you are using youtube or Netflix in your PS4 then if you turn it back on after the app crashes it won’t playback from the last watched parts like it used too. Now you can see what will happens if you are trying to play your ranked games in call of duty, uncharted series, battlefield, GTA or even FIFA. The console won’t save any files so you have to start again. So, it is important first to find ps4 error code ce-34878-0 fix so that you can enjoy your games.

Well, the major cause of ps4 error ce-34878-0 might be system software as it happens in almost all of the games in ps4 while in some rare conditions the application itself is faulty. Although the problem may be different the solution to ps4 error code ce-34878-0 problem is the same.

Well, there are different ways of solving this error but primarily there are 4 main solutions to these problems. Each of these requires basic skills to achieve so you don’t have to worry about hardcore ps4 skill. So make sure to try all of these solutions if you want Ps4 CE-34878-0 Fix in no time. Ps4 error ce-34878-0 can also be solved by these methods.

While it seems like an easy fix and it is these types of error that may occur when your ps4 is taking too much load and a simple restart will help it to clear its memory and run the application smoothly and thus giving ps4 error code CE-34878-0 fix.
To Restart the console:

No matter which game you are playing if it is not up to date with the software then it will have a hard time running in the console. So make sure to update the games to its latest version so that the bugs, glitches, etc that the game has will be fixed. You may get the update notification if you are online most of the time but if you haven’t then go to the ps4 screen and then choose the game you want to update. Press the options button then click the selection check for the update then it will give you the update file if it has any.

To install the latest game updates on your PlayStation:

2. “Update” your console if Any update is Available. (If your PS4 console is the latest version, then just skip this method.)

4. After it’s done, restart your PS4 and open the game to see if the error is fixed.

If you have upgraded your hard drive (HDD”) in your console than its time to change it back to the originals as according to sony it may be the reason that you are getting in ps4 and ps4 pro.

Upgrading the PS4 Hard Disk Drive is one of the most possible reasons for you to get the ps4 error ce-34878-0. So, it might help if you just re-install the original drive.

Note: Make sure you backup your all the data as doing this will erase all your saved data. So I recommend you save your data in the PSN cloud if you have ps plus account.

Well if nothing works than the worst part comes to contact ps4 support ho rarely who what we are talking about even though all the gamers have faced the same error. While they have got a page where you can see some methods to follow just follow this link to go to that page. But you rarely will get any help from them or the forums cause they never address the general issues so it will be hard for you to find ps4 error code ce-34878-0 fix.

Also See: How to Download Games Faster On PS4

While the technology is in arise but still there are many errors that we can’t still solve to date. If the above steps don’t work for you and you still get a CE-34878-0 error then feel free to comment below we will provide a specific solution according to your device or situation. For more PS4 helps visit our ps4 help page.